Home » Puberty and you » Inside » Gonads make the hormones T & E

The hormones Testosterone and Estrogen (T&E) are mostly made in the gonads. 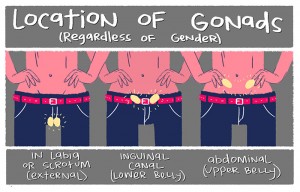 During childhood, the gonads don’t make a lot of hormones. But right before puberty, gonads grow and start making a lot more of them.

Why are testes and ovaries called gonads? Do they come from the same tissue?

Ovaries and testes come from the same exact tissue early in the growth of the baby—it is universal tissue. The body changes the gonads from weeks 6-8 in the womb to become testes and ovaries. How they change while in the womb depends on the signals they receive from genes. Talk to your doctor more on how yours developed, if you are interested.

Are gonads either testes or ovaries or are there other kinds of gonads people have?

One type called ovo-testes shares both ovary and testis tissue.

Another type that has some streak tissue but also some typical tissue that can make hormones and potentially sperm—this happens in partial gonadal dysgenesis.

Can other parts of the body make T?

Some T can be made outside of the testes or ovaries. Most of the time, this happens in small amounts in a place called the adrenal glands. Some of the time, the body can make a lot of T with the adrenals, like in a condition called congenital adrenal hyperplasia.
<< What do hormones do?
Gonads prepare to make babies (sometimes) >>