Home » Puberty and you » Outside » Erections and ejaculations – everything at work

Many guys and some girls have genitals that become erect—this happens when blood rushes into the genitals and makes them seem bigger and feel more sensitive.

All genitals (penises and clitorises) are of different shapes and sizes, and they change when they are erect.

Erections happen many different times. They can happen when you need to pee, when you’re waking up, if you feel attracted to someone (a.k.a. “turned on”), or at other random moments. It’s a part of growing up for lots of people!

Sometimes, when you sleep, many guys with working testes wake up to sticky stuff in their sheets or underwear. It’s not urine—it’s actually called semen or “ejaculate.” It’s white, sticky, and can sometimes contain sperm cells. This is a pretty typical part of growing up and is called a ‘wet dream’.

Ejaculate is different from vaginal discharge for young women with vaginas. Discharge that is whitish fluid that often appears in underwear/pants. Sometimes, if it changes color or texture, it might be a sign of an infection. Make sure to tell your doctor if you notice anything unusual about it (for example, a yellow color, ‘chunky’-ness, more discharge than usual, itching, etc.) Some people only have a little discharge and others have a lot. It just depends on your body.

Ejaculation doesn’t always look the same for different people. Some are watery, and some are thicker. Some come out kind of like a squirt; others can remain inside in tiny tubes that connect to the urethra internally. If this happens, the ejaculate will most likely come out in the urine. 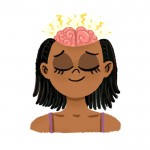 Erections and ejaculation might come along with something called an orgasm. For more information on this (ages 14+), click here.

Here are some great resources that are full of questions, answers, and ways to deal with erections and ejaculation.

<< Genital changes - everything at work
Your brain and mind >>